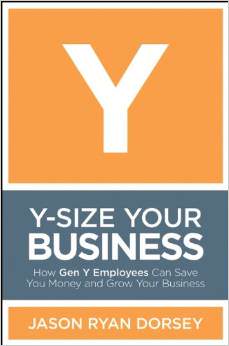 A lot of executives have noticed that the workplace is being flooded by a new generation of workers, and they are questioning who will be the winners, and who will be the losers. In reality, Gen-Y is here, and they are already inheriting our businesses, so let’s figure out how to make them winners, or we will all be losers.

By definition, Gen-Y is the generation born between 1977 and 1995 (synonymous with Millennials). There are about 80 million of them, and nearly two-thirds of them are already in the workforce with full- or part-time jobs. They will inevitably be taking over after Gen-X from the baby boomers who are now running most companies while pushing 60.

Morley Safer of CBS News 60 Minutes fame, has long been the negative voice with his tongue-in-cheek quotes like “They were raised by doting parents who told them they are special, played in little leagues with no winners or losers, or all winners. They are laden with trophies just for participating and they think your business-as-usual ethic is for the birds. And if you persist in that belief, you can take your job and shove it.”

At the other end of this thought spectrum is Jason Ryan Dorsey, who last year published “Y-Size Your Business,” on how Gen-Y employees can save you money and grow your business. Naturally, he is a member of Gen-Y himself, and he presents an insider’s perspective on how these career starters bring tremendous potential to the workplace.

He argues that the generational disconnect that many employers are experiencing with Gen-Y is pretty standard. Every new generation that enters the workforce causes criticism, frustration, and stress for the generations already employed. I think it’s pretty obvious that he is right.

Although every new generation causes friction and head shaking in the workplace, Ryan points out three factors converging on our current workforce that are extraordinary – factors that are radically raising the stakes for companies to figure out how to best utilize Gen-Y:

Safer and many others are convinced that the workplace has become a psychological battlefield and Gen-Y has the upper hand, because they are tech-savvy, with every gadget imaginable almost becoming an extension of their bodies. They talk, walk, listen, and text – sometimes all at the same time.

I don’t believe it should be viewed as a battlefield, and I’ve written previously about how to productively lead Gen-Y, and how to capitalize on the change they bring to the workplace. In fact, I’m convinced that the current tough economic times will be the reality check that many of them need to balance their idealism and solidify their work ethic.

You have an opportunity to make an entire generation of 80 million people your competitive advantage early, or just wait until they take it away from you. Why not make it your strategic initiative, and a positive legacy for yourself? I’m accepting the challenge. How about you?