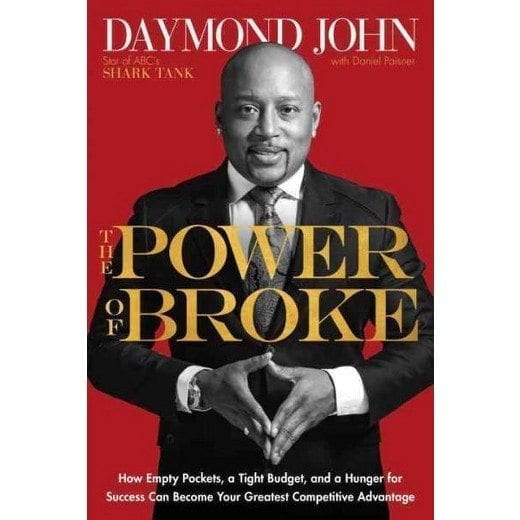 Daymond John – the man behind the powerhouse brand FUBU, a shark on ABC’s hit series “Shark Tank,” and motivational speaker – recently co-authored New York Times Best Seller, The Power of Broke: How Empty Pockets, a Tight Budget and a Hunger for Success Can Become Your Greatest Competitive Advantage.

John even has Former President Barack Obama’s endorsement – he appointed John a Presidential Ambassador for Global Entrepreneurship, a position that focuses on promoting the importance of entrepreneurship globally.

With only a $40 budget, the Queens, N.Y.-based entrepreneur got his start designing, creating, and marketing his streetwear clothing line, FUBU (standing for “For Us, By Us”).

With limited resources, he struggled for many years in a neighborhood that lacked role models other than his hardworking mom. To help her provide for their family, he began sewing beanies and selling them for half of the price they retailed for in local shops.

He soon realized that the hip-hop fashion market wasn’t being addressed, so he made it his mission to bring a street-style-centered brand to his neighborhood and others like it across the country. He began with a line of hats; shortly after, he would design t-shirts for this neglected market.

Even though John found his passion, implementing his plan wasn’t always easy. He used guerrilla marketing tactics to get his brand recognized by his target audience, but he soon realized selling wholesale was more lucrative than selling retail. He sneaked into a trade show in Las Vegas, made connections, and took $300,000 worth of orders in a hotel room.

However, wholesale buyers have lengthy accounts payable cycles, and John’s debts grew while he awaited payment. His mother maxed out her credit cards and took out a second mortgage on her home – which also doubled as a production studio and had stacks of clothing from floor to ceiling.

John now realizes that although he had the drive, he lacked the financial smarts needed when starting a business.

The Power of Broke provides insights into how to make the most of your limited budget while getting your business off the ground:

John’s story has a happy ending: today, FUBU is a $6 billion brand. Limited resources forced him to scramble to find creative solutions for overcoming barriers.

John always kept a healthy dose of paranoia when it came to his success with FUBU. As he wrote in The Power of Broke, “You have to be relentless, nimble, moving ever forward. No matter what.”

TwitterFacebookLinkedIn
This article was last updated on October 18, 2022