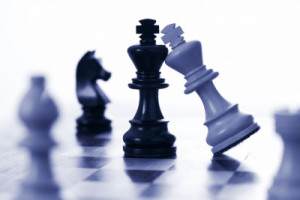 Businesses need to compete in the marketplace to satisfy customer needs by creating unique value for the customer. When companies create value for the customer, they are rewarded with future business opportunities. Companies that fail to create value for customers, or do it less efficiently than the competitors, will be less profitable and may eventually go out of business. According to Bruce Henderson, the founder of Boston Consulting Group, “all competitors who persist over time must maintain a unique advantage by differentiating over all others. Managing that difference is the essence of long-term strategy.”

The most successful companies in the world today, such as Facebook, Google, Apple, Nike, Procter & Gamble, and Toyota, have created enviable positions in the market via differentiated product offerings that offer a unique value to the customer. Competition is a necessary condition for developing strategy. Monopolies, that – by definition – have weak or no competition, do not devote a lot of time and resources to strategy development.

We live in an era of hyper-competition. Globalization has made the world a smaller place, and businesses can leverage resources from all around the world to compete. During the past many decades, businesses have focused on reducing costs via outsourcing of non-critical activities to lower-cost locations, as well as on realigning their resources internally to deliver better value to the customer at a lower cost. However, becoming more efficient in operations does not mean a business has a strategic advantage over the others. Others are also trying to reduce costs and become more operationally efficient at the same time. Thus operational effectiveness becomes a necessary, but not sufficient, condition to perform well in the marketplace. Many of the tools and techniques of operations management, such as Total Quality Management, Supply Chain Management, Lean Operations, etc. make a business more competitive.

A business can surpass its competition only if it can establish a sustainable competitive advantage, i.e. a difference that it can preserve. Competitive advantage can emerge from many approaches, such as superior product design, high-quality reputation, supply chain management, novel ways of reaching the consumer such as Amazon.com’s web-only strategy or Dell’s direct-to-consumer strategy. All competitive advantage is temporary since as soon as a company achieves excellence in one area, others will rush to copy its features, thus weakening its differentiation. For example, Apple Macintosh was the first computer aimed at the mass market to have a graphical user interface and a mouse. It was soon copied by IBM clones and Microsoft, thus eroding Apple’s differentiation. Even today, Apple continues to lead in user interface innovation, such as touch and gestures on iPhone, iPod Touch, and iPads. However, competitors such as RIM Blackberry, Nokia, and LG have already started copying this innovation.

Strategy involves deliberately choosing a different set of activities to deliver a unique mix of value to the customer. For example, Amazon was an early mover in the e-commence space and quickly established a unique position in the minds of the consumer as a reputable vendor on the web. It did not have a brick-and-mortar store presence. It stayed true to its web-only strategy while many competitors have moved to a hybrid physical store as well as web presence.

Apple moved into the retail space as a way to reach its customers that were not being served well by its distribution channel comprising PC retailers. Its move into retail was widely criticized as doomed to failure because Apple had no retail experience. Critics could point to the failure of Gateway’s strategy of company-owned stores to reach its customers. Apple defied conventional wisdom and focused on offering a superior customer service experience, modeled on the quality experience of Four Seasons hotels. Its retail strategy has been an outstanding success, leading to the establishment of 364 stores worldwide by early 2012, including the USA, UK, Canada, Japan, Australia, Switzerland, Germany, Italy, France, and China. Today, Apple has the highest sale per square foot in the retail industry, beating even Tiffany’s, the jeweler. Microsoft tried to copy Apple’s retail strategy by opening its own stores. As of early 2012, it only had 18 stores. Its future in retail is open to speculation at the moment.

According to Prof. Michael Porter of Harvard Business School, a thought leader in the field of corporate strategy, the essence of strategy lies in “choosing to perform activities differently than competitors.” Apple has consistently outperformed its competition by creating unique value through unique activities. Take iPods and iTunes as an example. When iPod was introduced in 2001, it had modest sales. When the iTunes store opened in 2003, iPod sales took off. Today, the iTunes store sells more music than Wal-Mart and commands over 70% of all downloaded music. It had 27% market share of all music sales in the US in 2010. Whereas many competitors such as Microsoft and Google have tried to copy iTunes, they have not been successful in mounting a challenge to Apple. Finally, Microsoft killed its unsuccessful Zune music player after spending billions of dollars over several years trying to get a foothold in the consumer market.

In France, they have a saying: “Vive la difference (Long live the difference)”. It is true in strategic thinking as well.

Home » Blog » Strategy » The Essence of Strategy: Be Different