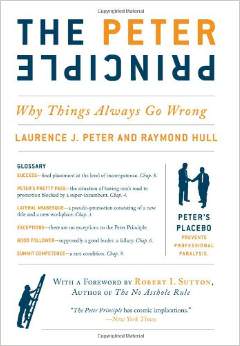 Most people think that the Peter Principle (employee rises to his level of incompetence) only applies to large organizations. Let me assure you that it is also alive and well within startups. There I see founders and managers who are stalled transplants from large organizations, and technologists trying to run the business.

Forty years ago, in a satiric book named “The Peter Principle”, Dr. Laurence J. Peter first defined this phenomenon. The principle asserts that in a hierarchy, members are promoted so long as they work competently. Sooner or later they are promoted to a position at which they are no longer competent, and there they remain, unless they start or join a startup to get the next level.

In all environments, the move to incompetence often occurs when competent technical people try to step into management or executive positions, for which they have no aptitude, interest, or training. How many technologists have tried to run startups and failed?

So what are the keys to avoiding this problem for yourself, and recognizing the signs and requirements in your own team, before the “level of incompetence” paralyzes your startup:

Another important point is to recognize and deal immediately with occurrences of the Peter Principle. If you are the CEO, and you tolerate ineffective people in important positions, they will suck the life out of your startup. The good people will fade away, and only the bad will remain.

The Peter Principle is something that we all have to deal with, in our own career, and with other team members. In a small startup, everyone has to carry a maximum load for survival, and everyone sees the non-performers. If you are the last to see the problem, or the last to react, maybe it’s time to look in the mirror.

Home » Blog » Business Basics » Is Your Startup Team Up to the Task?