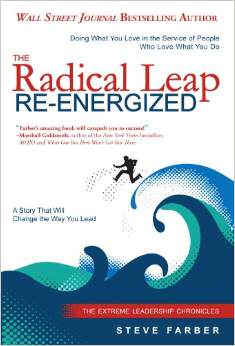 By definition, most entrepreneurs are thought leaders. They have the ability to recognize a market need, the skills to design and implement a solution, and the drive to start a business from that solution. It all comes from within themselves. A business leader does the same thing and more through the people around them. Most entrepreneurs are not both.

In reality, a successful startup can be built by a thought leader, but growing a successful business requires a business leader. That’s why venture capital investors often replace startup CEOs as a condition of their scale-up investment. That’s why so many startups plateau after gaining some initial traction, and are run over or acquired by their competition.

Much has been written on this subject, including the integration and update of two famous business books by Steve Farber (former partner of Tom Peters), this one called “The Radical Leap Re-Energized”. Farber highlights succinctly the traits of radical and profound leaders (extreme leaders) as follows:

In this extreme leadership model, leaders aren’t afraid to take risks, make mistakes in front of employees, or actively solicit team feedback. Farber asserts that most of us, at some level, have the innate ability to become a business leader. Getting fully in tune with who you are, and then following your heart, goes a long way towards helping you discover the leader you can become.

Many entrepreneurs who are great thought leaders are unwilling to listen and network. They can’t imagine that their vision for the business can be improved, or even implemented by others. They don’t hire people until it’s too late, because no one else can do the job up to their standards, or with their commitment. At best, they hire “helpers” rather than help, and are too busy to train the helpers.

Obviously, some people who call themselves business leaders are only posing. They wear the label and assert the title without putting their own skin in the game. The best leaders approach the act of leadership as an extreme sport, and they love the fear and exhilaration that naturally comes with the territory.

Business leadership is not a solo act. Real leaders accept the job of recruiting, cultivating, and developing other leaders as priority one, as well leading on the thought side. Learning to be both a thought leader and a business leader can make you great. Steve Jobs is an example of someone who struggled with this one, and won. Where are you along the spectrum?