VCs invested $28.3 Billion in 3,267 deals in 2012. While the total invested was down by 7.5%, the number of deals was up by 7%, according to the most recent survey by CB Insights published last week. The mobile sector saw a five-quarter high in activity. Mobile deals are taking share away from Internet deals, according to CB Insight’s report titled “Venture Capital Activity Report – Q4 2014.”

Early stage deals dominated the mobile sector, with Seed and Series A funding comprising nearly 75% of all deals in the sector. This means that VCs see mobile technologies and applications as the new sweet spot.

Most of the deals in the mobile space were in the areas of wireless, video, CRM, health, gaming, and advertising. As the mobile market matures, with smartphones comprising over 80% of total device sales in the U.S., the market is ripe for mobile applications. The Android and iOS platforms comprise nearly 90% of the mobile market, with Blackberry (RIM), Nokia, and Microsoft left fighting for the remaining 10%.

The message for mobile app developers is clear: Develop for Android and iOS first. Unless you get specific funding from Microsoft or RIM, it may not be worth your while to go after the minority platforms.

Most of the $2.6 Billion invested in 2012 went to consumer apps, followed by enterprise apps, e-commerce and mobile payments, advertising, and video, according to Rutberg and Co. – a research firm in Silicon Valley: 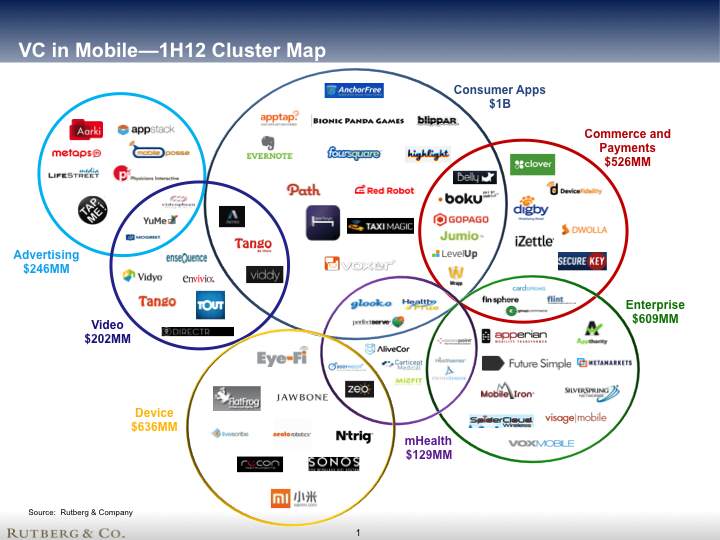 Investing in Apps, Not Companies

There is a new twist in investing in apps, launched by an ex-Nokia executive Tero Ojanpera. His firm Vision+, armed with $30 million in funding from Nokia and Microsoft, seeks to invest not in the companies per se, but in the apps themselves. It provides go-to-market funding to app developers, in exchange for future royalty streams. The benefit for entrepreneurs is clear: they do not have to give up a part of their company. The fund is looking to invest in up to 200 apps. Typical investments will range from $100,000 to $700,000.

The fund is focused on investments in Europe initially, with plans to enter the hot US market in the near future. It is platform agnostic. Even though the fund gets most of its funding from Nokia and Microsoft, it will invest in Android and iOS platforms.

The Path to Success

So how do you attract VC funding for your app startup? Here are a few pointers:

Startups need a minimum viable product, not an all-singing, all-dancing version. Test this product with a select audience. Watch people use your app. Don’t ask them what they want. Steve Jobs famously said, “It is not the customer’s job to tell us how to design a product. It is our job to understand what will delight a customer.”

Recently Tim Cook, CEO of Apple, said: “Our job is to design products that you did not think you needed, but now can’t live without.” Think of the apps you use on a daily basis. Then design apps that will become part of the daily lives of your users.

VC’s are investing in mobile apps because that is where the growth is. Now is the time to think of an application, or a game, that will delight your users. Apple has paid out more than $4 Billion to app developers. Do you deserve some of that money in the future?