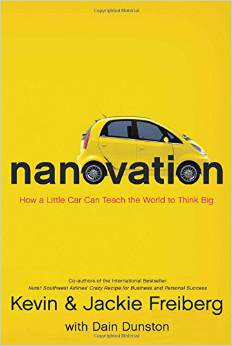 What sparks paradigm-shifting innovation in any business? It’s a special mix of entrepreneur and company, regular in every respect except for having the courage and foresight to make an idea happen that was supposed to be impossible. As an entrepreneur in a startup, how do you know if you have this potential, and what are the steps to get from an innovation to a revolution?

The first step is to meditate on the examples set by others, like Steve Jobs of Apple, Jeff Bezos of Amazon, or Thomas Edison with the electric light. There are many others, like the one I just finished about Ratan Tata bringing out the Nano car in 2009 in India for less than $2,500. The book is called “Nanovation,” by Kevin & Jackie Freiberg.

These authors have studied many such examples, and summarize my own perspective on the characteristics of entrepreneurs they call “nanovators,” that produce true, life-changing innovations, which they call nanovations:

Jeffrey Immelt of General Electric argues that the next big thing, like the Nano, could well be from “reverse innovation,” where instead of industrialized nations adapting their products for emerging markets, innovation in emerging markets will bring new paradigms to home markets. In any case, the future is defined by what we put off until tomorrow, so don’t wait too long to get started.