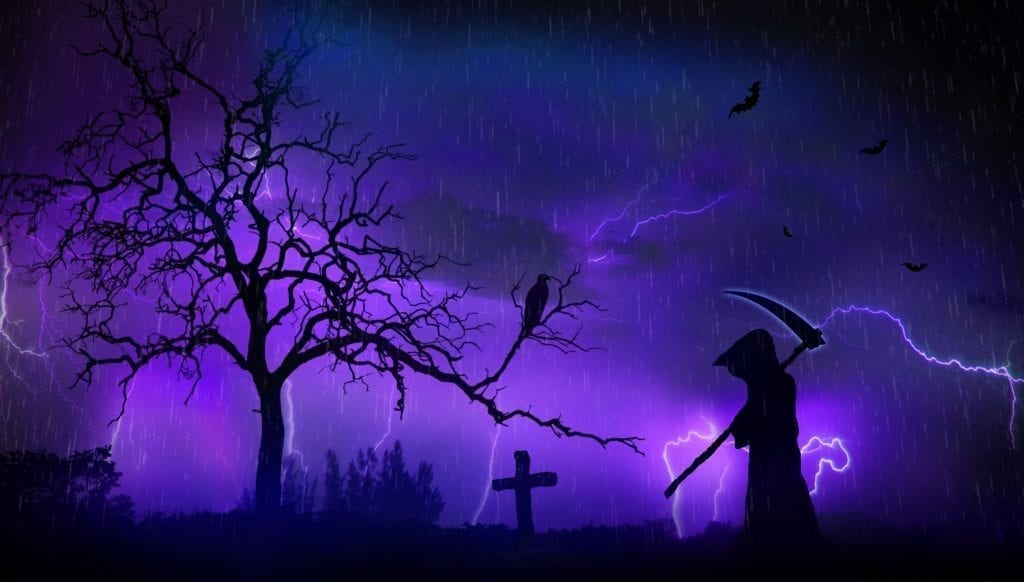 The desired proximity to competition varies with the type of business. A study on retail clustering showed the relative propensity for different kinds of businesses to agglomerate. Be careful, as there is a trick to this sweet research treat – the first comment below the study questions its methodology! Nevertheless, it’s no mystery that car dealerships tend to cluster much more than jewelry stores.

When researching the target market, the locations of terminated businesses could suggest areas to avoid. In the example below, red drop pins are operating fitness centers, and skulls are dead fitness centers. If considering the ratio of those health clubs that are alive vs. those that have passed, it is in the east (right) portion of the map where there are the fewest departed per operating (1:2). 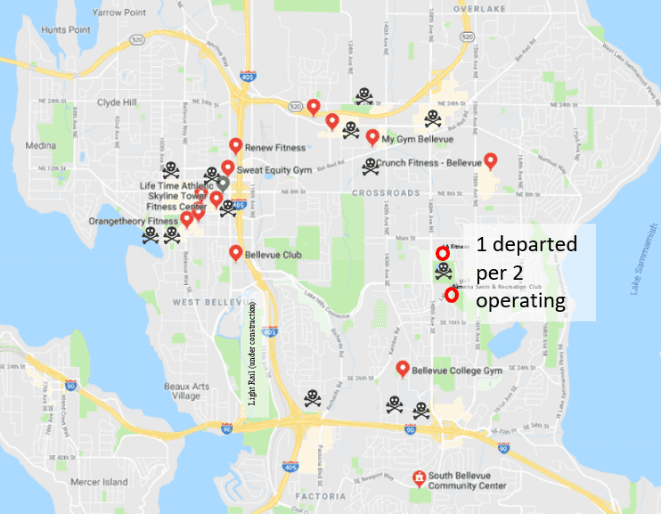 If you wanted to open a gym in Bellevue, you could search “Bellevue, WA Yelp closed gym,” and get a dozen results. A discussion on finding shuttered businesses on Yelp acknowledges it is not a straightforward process, but it is still the best resource.

ReferenceUSA is a subscription service offered for free at many libraries or at home with a library card. One can select a “closed business” filter and then specify the geographic area and the industry. The drill-down industry selection produced less noise than entering the NAICS code. Ultimately it was almost as good as Yelp, providing some listings not previously known, but also missing some of the graves uncovered by Yelp.

You can time warp with the Wayback Machine, but beware!!! In a search for “Bellevue gym,” there were 49 false positives! The Yelp search had already identified the only closed gym in Bellevue. It’s better to use Wayback for examining the former websites of known URLs which have entered the ether.

A search on your secretary of state website will kill time but not be very helpful finding deceased entities unless your state provides for searches by industry. Most likely, you’ll have to search each zip code and each legal status individually and try a search term like “fitness” that might be in the corporation name. Dead corps can be administratively dissolved, expired, inactive, judicially dissolved, terminated, or voluntarily dissolved. Most are administratively or voluntarily dissolved or inactive. Resurrect the Secretary of State’s website once you get a company name from Yelp to search for the former business owner, and then use LinkedIn to contact the individual if you’re brave enough to commune with the dead.

Why Should I Be Afraid?

Notwithstanding other factors such as street traffic and demographics, one must also be aware of nearby anchors or chains closing. Business Insider reported that if a company is barely profitable and a chain store closes within 50 meters, it will increase the chance of failure from 17% to 22%. You’ll have to do some field research to prevent opening next to the walking dead. Check business broker sites for suspicious sales listings nearby that might not actually be “owner retiring.”

If you’re raising capital from debt or equity investors, they will want to see that your business plan includes your proposed location and proximity to the competition. If you do not yet know your precise location, this could be in the context of a feasibility study. The question then becomes that of identifying the locations that maximize feasibility. A study by Penn State University called “The Impact of Retail Location on Retailer Revenues” concluded that retail location variables explain 17.8% of revenue variance. Document the going-concerns along with the tombstones in a competitive analysis to share with stakeholders and potential investors. Just don’t actually call them tombstones, which is a term used in finance to describe the basic information on previously financed companies.

The Balance Small Business writes: “Waiting to find the perfect store location is better than just settling for the first place that comes along.” People in the U.S. spend eighty percent (+/- 2%) of their disposable income within 20 miles of their homes, but that doesn’t mean they spend their money homogenously. If using a broker to find your location, don’t expect them to know more than you about your industry and its propensity toward agglomeration. Don’t expect them to know where similar businesses once operated but ultimately succumbed. Often, the competitions’ demise will be the result of economics, and a bad location may be the reason.

Before selecting your ideal retail location, dig around to see where the bodies are buried.