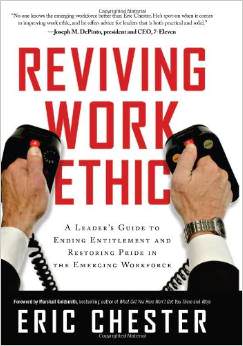 Great entrepreneurs have long been the epitome of people with a great work ethic. But many complain to me that it is becoming harder and harder to find team members and employees who demonstrate and live the same culture. Somewhere along the way, work ethic seems to have been replaced by a pervasive sense of entitlement, especially in the younger generations.

As a new year starts, now is the time to assess your own situation, set out clearly what you expect from each and every team member, and unleash the entrepreneur inside every employee. As a guide, I enjoyed the analysis of Eric Chester, in his new book “Reviving Work Ethic,” which provides a leader’s guide to ending entitlement and restoring pride in the emerging workforce.

His focus is on young employees, whose habits and ideals might be more easily moldable. But with people of any age, work ethic is knowing what to do and doing it. According to Eric, there are seven elements which are essential to an individual’s work ethic, as follows:

The Gallup Organization estimated some time back that there are over 22 million employees with a poor work ethic, or actively disengaged, costing the American economy as much as $350 billion dollars per year in lost productivity including absenteeism, illness, and other problems. The longer-term problem is slow growth, and an ultimate failure to compete.

Are you and your company part of the problem, or part of the solution? Remember that a poor work ethic by even one person in the organization is a virus, which can spread like wildfire and bring down the whole organization. The antidote is daring to face the work ethic issues in yourself and your company, early and often, to keep you in the ranks of the great entrepreneurs.