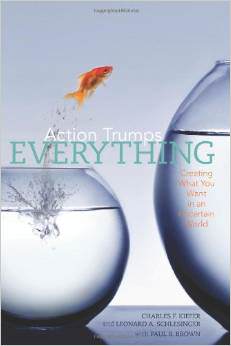 I’ve always said that startups are all about execution. Sometimes I encounter self-proclaimed entrepreneurs who have been “thinking” about a concept for many years, and haven’t started yet. Some of these may be visionaries, but none are real entrepreneurs.

Entrepreneurs live by the principles discussed by Leonard A. Schlesinger, President of Babson College, in his book titled “Action Trumps Everything” which he wrote in conjunction with friends Charlie Kiefer and Paul Brown. In it, he explains how the power of entrepreneurial action helps people create what they want in an uncertain world.

If there is no way of knowing what the future will be like, act. It is the quickest way to learn. Take one small step toward your goal when it is far away or difficult to accomplish. Then evaluate where you are. A journey of a thousand miles really does begin with a single step.