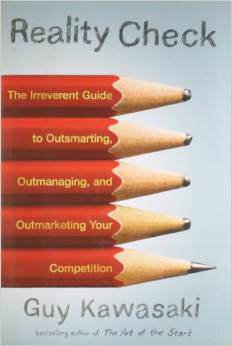 Most of the time, I’m all about providing encouragement and inspiration to entrepreneurs. They need it and they deserve it because entrepreneurs are the lifeblood of our economy. But every so often, I try to give them a reality check, just to keep their feet on the ground and their nose to the grindstone.

Many years ago, I enjoyed one of Guy Kawasaki’s first books, “Reality Check: The Irreverent Guide to Outsmarting, Outmanaging, and Outmarketing Your Competition.” In his classical humorous and cynical style, he could reset your dreaming in a moment. Here are ten themes from the book that I think are just as relevant today as they were then:

Of course, there is much more, but I think you get the idea. I also hope these themes don’t send a totally negative message because the book is funny as well as thought-provoking. I do believe we all need reality checks to face our challenges head-on, so that we can deal with them and survive, rather than just float along in the clouds until our dreams evaporate.